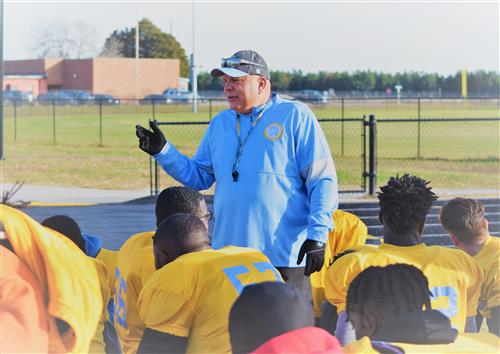 MONETTA, S.C. – There are different ways to describe what has taken hold this week in the hearts and minds of the Upper State Champion Ridge Spring-Monetta High Trojans.

Some refer to it as “carpe diem” or seizing the day. Others don’t want to “miss the moment” or yet another derivative of the same sentiment. Whatever the case, the Trojans have fully embraced the fact that the opportunity to make school history is right in front of them when they face the Class A defending champion Green Sea-Floyds Trojans (12-1) on Friday in Columbia.

Ridge Spring-Monetta Head Coach Brian Smith has been pleased with how his players have handled their playoff run thus far. The temperatures may have cooled considerably since the state playoffs started, but the RS-M Trojans (10-4) have remained red hot. He says the greatest task for his team is maintaining some semblance of normalcy in a week that is anything but normal.

“This is just a different kind of week,” commented Smith. “We have to handle all the distractions. We’ve had a couple of college coaches come in, and one of our players received an offer, which was great. We love it, and it’s great, but none of that has anything to do with what’s going to happen on the field on Friday night. We have to play the ballgame. At 8:00 p.m. on Friday when we kick this thing off none of those things will matter.”

Smith was proud of the way his team zeroed in on its preparation ahead of the Upper State title game the previous week, a contest which had the entire community buzzing prior to kickoff.

“I felt like we handled last week really well,” Smith added. “Our kids did a great job of being focused in practice. We had a great attitude and we got after it. We need to do that again in order to win this ballgame.”

The team will do some things a little differently this week, such as holding Wednesday’s practice at Newberry College to help the players acclimate somewhat to a larger venue. Smith says he reminded them that while the crowd on Friday will be bigger than anything they’ve seen, the measurements of the competition field are no different, and they just have to go out and play.

“We’ve talked about the enormity of the game, and I think when they saw those state championship rings Monday at the press conference that’s when I think it became real for some of them,” commented Smith. “It’s something you understand, but you cannot get lost in that.”

“It’s the old thing from the movie ‘Hoosiers’ where you show them the field is still a total of 120 yards long, with a playing field of 100 yards, and it’s 53-and-a-third yards wide and all that,” he added. “Nothing changes. We just have to play the game, so that’s what we’re going to do.” 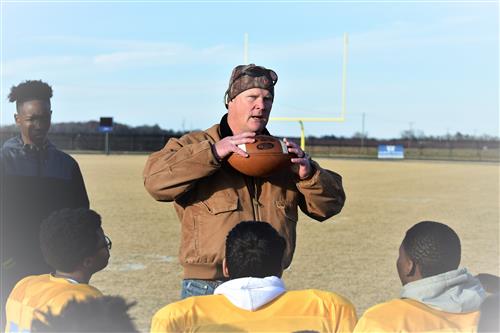 The school last advanced to the state championship in 2006, where the team fell short in a flurry of uncharacteristic turnovers. Mark Rodgers was the head coach of that football team. He is also a proud former Trojan player and Ridge Spring-Monetta High alumnus who currently serves as the head coach at Wardlaw Academy in Edgefield County. He spoke to the team before practice Tuesday, where he told the players not to let their opportunity slip away. Holding up a football, he told them the ball represents the Trojans’ program and they are not to let it go.

Rodgers told the players that not only was the entire community behind them, but that all of the former Ridge Spring-Monetta players who had worn the blue-and-gold uniforms before them were cheering for them as well, in spirit if not physically.

“When you walk on that field they may as well paint a blue line down the sideline because all those blue ghosts will be there,” stated Rodgers. “Your uncles, your grandparents, and your daddies. Everyone who has ever put on that helmet walks on that field with you on Friday night, and you will carry their hopes and dreams that they didn’t get to finish.”

Rodgers told the current Trojans that Friday was their time to shine.

“This is what you’ve worked for,” Rodgers told the Trojans. “I’ve put that uniform on. I’ve bled out on that field. You are standing somewhere that’s special. All you have is this year. You are never guaranteed to be here and be in this position again. In life, all you can ask for is one opportunity and one shot to see what you can do. This is your shot.”

His message resonated with the Trojans.

“I’m hungry and ready to play,” commented Tray Dean, who leads the team defensively with over 100 tackles from his position at defensive end. “Playing in the state championship is something new and something we’ve never had happen with this team so it feels amazing to have this opportunity.”

“This is our time,” stated sophomore quarterback Remedee Leaphart. “Everyone counted us out and thought we would lose in the first round, but we’re still here and we’ve shocked the world so we just have to keep it going.”

When Leaphart is asked whether the Trojans have one more “shocking” performance in them, he looks up and answers with conviction. 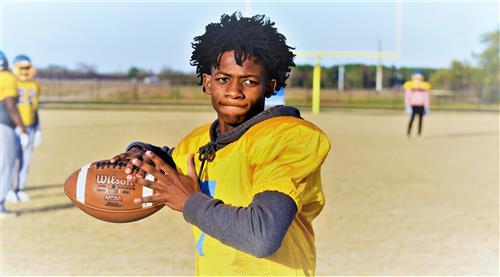 As the defending Class A state champions, the Green Sea-Floyds Trojans are likely the favorites in Friday’s game for many, and for good reason. They have throttled their competition for the vast majority of the season scoring more than 60 points three times while posting three shutouts and holding opposing teams to single-digit scoring in all but two games on defense. Their lone loss was to Class 3-A opponent Aynor High School, which finished the season at 11-1.

“They run the ball really well,” Smith said of the opposing Trojans. “They have a great running back and the quarterback runs the ball hard. They run two tight ends and two flankers with a single back, or they run a single wing set and run it right at you. Their back gets lots of yards after contact so we have to be cognizant of that and have guys get to the football and make the tackle.”

Just as they were in the lead up to the Upper State title game, turnovers will be key. However, Smith said he feels special teams play may provide a similar opportunity in the state title game.

“Anytime you score on defense is a great night,” Smith said of recent interception returns for scores from Dantrell Weaver, and Tray Dean’s fumble recovery for a touchdown against Wagener-Salley. “In the playoffs we’ve had a good little run of that here for a while, but you can’t count on that every night. We are going to have to get one in the kicking game this week. We have to work a little harder and the kids know that. Our defense has been playing well and we’ve built some momentum, so we have to keep it up four more days and play our best game on Friday.”

Dean, a senior, echoed those sentiments.

“We have to stop the run and be confident on defense,” Dean added. “I’m going to do my best out there and have some fun.”

“We have to hold onto the ball, go out and make good plays and keep our heads up if we make a bad play,” commented Leaphart. “If you make a bad play you just put it behind you and go score a touchdown on the next play and bring it home. There’s no extra pressure. I just make sure the team stays positive and keep a smile on my face.”

Leaphart makes one thing very clear. He and his Trojans teammates are focused and ready to go.

Advance tickets may be purchased for Friday’s game from the main office at Ridge Spring-Monetta High School and online at https://gofan.co/app/school/SCHSL. Tickets are $12. When purchasing tickets online, be sure to select your quantity of “Ridge Spring-Monetta” tickets, to ensure the school receives accurate proceeds from ticket sales.