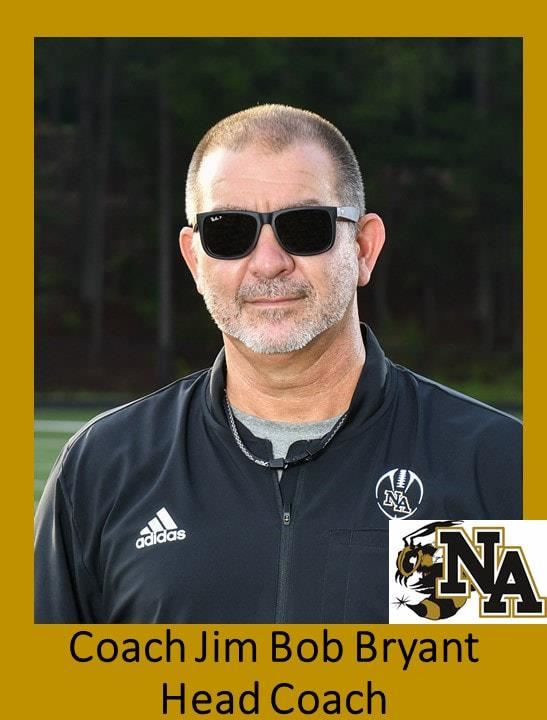 Jim Bob Bryant was born and raised in North Carolina and after graduating from ECU in 1995 with a degree in Exercise and Sports Sciences, Coach Bryant was Offensive Coordinator at Williamston High School (his alma mater) until 2002. During this time, Williamston HS won the 1999 NC 1A State Championship and played for the title in 2001 and 2002.

Bryant took his first Head Coaching Job at Greene Central High School in 2003. In 5 years, his teams finished 42-21 and won 3 Conference Titles.  Bryant started Statewide Combines for the NC/SC Shrine Bowl and ran them for 10 years.

Coach Bryant took over as Head Football Coach at Havelock High School in 2008, where he coached the Rams to an overall record of 118-16 during his 9 years there. During his time there, Havelock played for four 3A State Championships, winning three consecutive State Championships in 2011, 2012, and 2013. Havelock also led the state in total yards, points and/or defense in 2011, 2012, 2013 and 2014

In 2017, Coach Bryant moved to Western NC and became Head Football Coach at Freedom High School in Morganton, NC, where he coached the Patriots to a 7-5 record. During Bryant’s one year at Freedom, 13 offensive school records were broken.

Coach Bryant retired from NC after coaching for 20 years and was offered the Head Job North Paulding High School in Dallas Georgia in 2018.  Bryant’s first two seasons at the helm, the team was 13 and 9 and broke several school records.  In 18 years as a Head Football Coach, Bryant’s Over-All record is 190-53.  Bryant and North Augusta Football won the 2020 Region Champioship.  All of Bryant's teams have always made the play-offs.

Here are a few other notable accomplishments by Coach:

Jim Bob Bryant has put numerous players in college, 5 in the NFL, Coached 5 State Players of the Year, had 11 articles published by National Magazines, flown with the Blue Angels, and received the Governor’s Award for Bravery and Heroism.  He has a wife, Mary Candace, two sons, Charlie and Cole, and has two dogs named Coach and Jerry Seinfeld.

Coach Bryant is now the HFC at North Augusta HS and teaches Strength and Conditioning.

To View and Read The Handbook:  Click on the link.